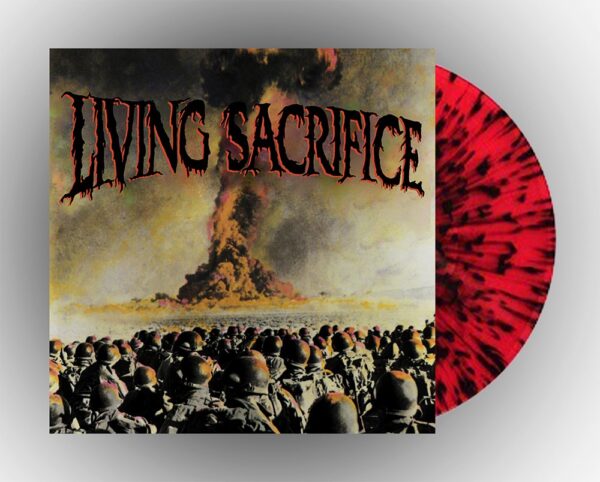 The American powerhouse Living Sacrifice celebrate the 30th anniversary of their self titled debut album
from 1991 with this definitive release via the Norwegian metal label Nordic Mission.

Formed in Little Rock 1989 the band was in need of legal guardians in order to sign their first record
contract with R.E.X recordings, and hit the studio with Kurt Bachman(Believer) and label manager Doug
Mann to record this thrash metal gem. In a time when old school straight up thrash metal was not exactly
at the peak of it ́s popularity and the seals between christian and secular music was shut much more than
what we see today the album was embraced by the christian audience, but as distribution structures and
listening patterns would have it unfortunately never reached the general metal audience.
As for the music, this album reeks of harsh riffs, outstanding musicianship and youthful vengeance that
still makes ears bleed after 30 years. The album grooves, delivers outstanding guitar solos and leaves the
listener with the feeling of putting once head in a blender only interrupted by tasteful intermissions that
prepare the listener for the next attack. The vocals are haunting, delivered with a sense of urgency and
the notion that a message needs to be delivered. Machine gun guitars and delicious drum chops and
bass fills that leaves the album sounding fat and beefy.
Later on, Living Sacrifice would become a beacon and inspiration to many bands in the American
hardcore scene, sell truck loads of albums and tour extensively. This release does however represent an
unyielding and wildly aggressive speed thrash attack that identifies bands with a burning desire in their
craft.
With this ultimate 30th anniversary we hope to increase the attention around Living Sacrifice and their
furious debut album. We believe it would have had a much more solid standing today when music and
lyrics not are confined to a certain audience, and listener around the globe appreciate quality before
content.
Heads will bang, air guitars played and moshing may occur as the LIVING SACRIFICE debut blasts trough
your speakers!