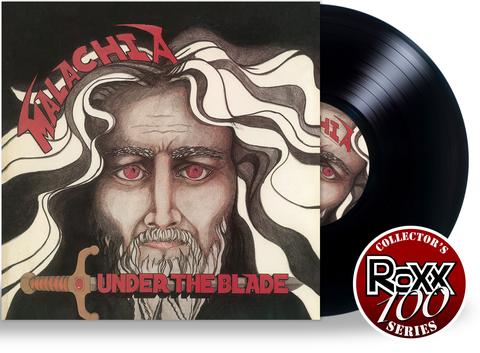 Back in 1986 the Christian metal scene was really starting to gain a lot of ground. California was a great part of the music and artists that were coming out back then. Malachia was one of those bands with their very early Queensryche sound. With their debut EP ‘Under The Blade’ being released indepdendently via the bands own Wayde Productions. Originally this release was sold ana vaialble by the band on cassette tape and on a 12″ vinyl pressing. Both of these were in very limited quantities back then.

In 1987 the band would go back in the studio and start to release their next release ‘Red Sunrise’ which was a re-recording and interpretation of the tracks with an added keyboard sound that the band did not have on that first release ‘Under The Blade’ and the band would again release this independently via Wayde Productions and only on cassette tape and a 12″ vinyl pressing.

The band would continue to play shows all around California and gaina cult following in the US and abroad, but alas the band would ultimately never record another full length release.

2021 marks the 35th anniversary of that debut release ‘Under The Blade’ and to celebrate we are going to bring this rarity back to life! That is unless you would like to pick up a copy off of Discogs for the lovely price of $979….

Yes this alsbum is a bit RARE, in fact personally we had been looking for one for years. So what does one do when they cant find a copy? Well we completley recreate that vinyl and offer you one last chance to pick up this beauty of a Christian Metzl collectible. But you wont want to wait even on this one as it will only be released on vinyl in a one time pressing of 100 copied and a Limted first time on stand alone CD on a gold disc format and limited to only 300 copies!

Under The Blade artwork has been meticulously upgraded by Scott Waters of No Life Til Metal Graphics with a brand new layout and design inside this amazing pacakge. The sound was also completely remastered by Rob Colwell of Bombworks Sound and you have never heard this album sound so good!