View cart “Holy Blood – Glory To The Heroes [EP] (CD)” has been added to your cart. 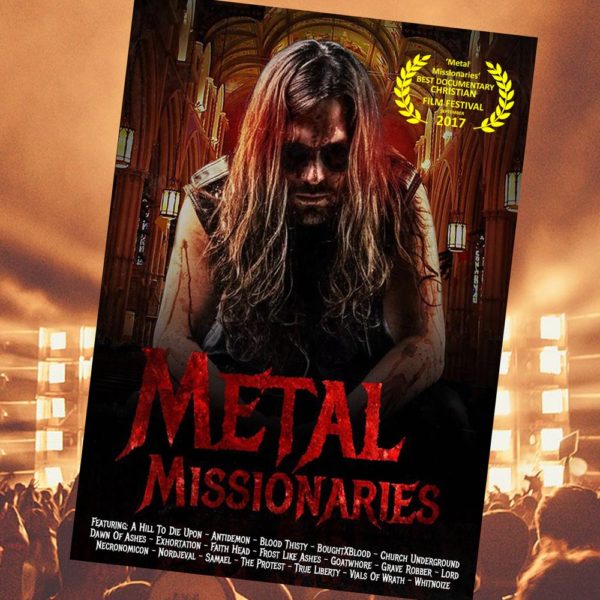 region free ntsc
the long awaited and award winning documentary by director and metal aficionado, Bruce Moore. Featuring: A Hill To Die Upon, Antidemon, Blood Thirsty, BoughtXBlood, Church Underground, Dawn Of Ashes, Exhortation, Faith Head, Frost Like Ashes, Goatwhore, Grave Robber, Lord, Necronomicon, Nordjeval, Samael, The Protest, True Liberty, Vials Of Wrath, and Whitnoize.
Metal Missionaries brings you into conversations with some of Christian music’s most extreme artists so you can get a firsthand feel for the scene and answer some questions or doubts for yourself.
This film is the first full-length documentary about the extreme Christian Metal scene. You’ll see that although their music may be aggressive and they may not “look like Christians”, their hearts burst with the Holy Spirit. They don’t need a label or a collar to know who they are; they are missionaries who take their faith not into the deepest reaches of the jungle but into dim, dirty rock clubs and dusty music festivals night after night to wash the crowds clad in black t-shirts and denim in a sonic flood of God’s unfailing love for them.
The genre of Christian heavy metal is no longer characterized by Stryper’s trademark yellow-and-black spandex. Instead, it’s found on the stages of the wildly popular Warped Tour, it’s featured in the pages of secular music magazines like AP and Guitar World, it draws thousands of fans into rural Illinois every year for the Audiofeed Festival, and its bands garner thunderous applause from hard rockers at events like “The Revolver Golden Gods Awards.” And, while the scene has changed from eyeliner and leather to bushy beards and breakdowns, the musical message has remained the same: God’s love for us knows no bounds and the free gift of grace is spoken in every language. That includes the language of distorted Marshall Stacks that invite those who hear to worship Him with shouts of praise and swirling circle pits.
Curiously enough, there might be enough similarities to refute the fact that these two ideas cannot coexist within the same universe. Death, pain, and suffering are all themes that metal musicians embrace, while Christianity was formed on the basis of its original followers being persecuted and killed for following a Savior who gave his blood and died for our sins. So which is it?
Do Christianity and heavy metal mix together like oil and water?
Or is Christianity as metal as it gets?