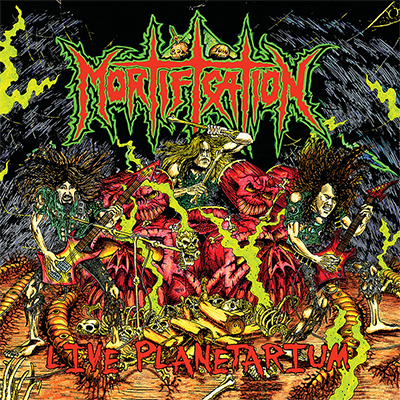 Recorded in October 1993 at Australia’s iconic Black Stump Festival, Live Planetarium was the fourth Mortification release on Intense Records and their first live album. And what an incredible live show it was, almost flawlessly performed in front of a wild crowd! The set list is a selection of classic songs from their first 3 albums, capturing the diversity of the band’s vision. This is truly Mortification at their greatest, their innovative blend of extreme metal styles setting them apart from the crowd. Their intensity, energy and variation are perfectly captured on this recording – Steve’s thick bass and powerful voice, Michael’s sharp guitar chops and Jayson’s precise drumming – with the incredible production making every instrument clearly heard.
Gone is the original computer-generated cover (lame!), replaced by a brutal depiction of the band drawn by Troy Dunmire (who became Mortification’s go-to cover artist). Live Planetarium has been out-of-print in any format for a long time and this is the first time it has ever been available on vinyl. Including an insert with lyrics and an abundance of photos, this is a must for fans of this pioneering Aussie band and any true metal enthusiast.
NOW SHIPPING!
TRACK LISTING:
Side A
Grind Planetarium
Distarnish Priest
Brutal Warfare
Destroyer Beholds
Inflamed
Side B
Scrolls Of The Megilloth
Time Crusaders
From The Valley Of Shadows
Human Condition
The Majestic Infiltration Of Order
This Momentary Affliction