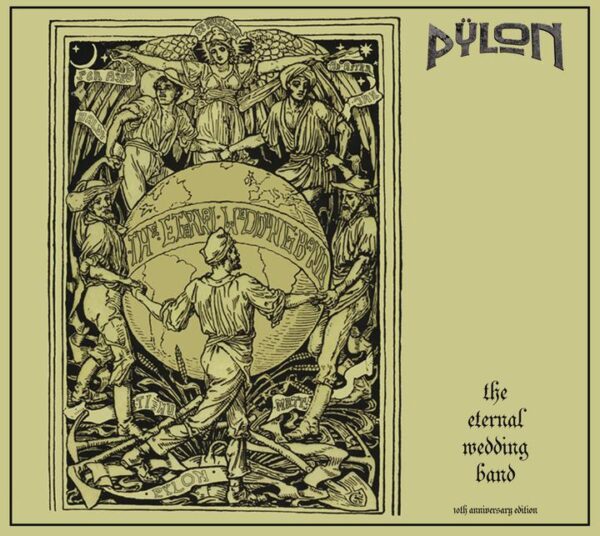 WE HAVE THE LAST 2 COPIES AVAILABLE!!!
Limited Edition 10th Anniversary Remastered and Expanded Deluxe edition of the Pÿlon album The Eternal Wedding.

In a certain way, Swiss doom metal heads Pÿlon have always been about looking back – looking back in a “born too late” fashion when it comes to the ground-breaking history of that heavy doom rock sound that was spearheaded by multi-faceted gloom overlords like Black Sabbath, Candlemass and Count Raven.

Ten years ago, Pÿlon released their sophomore album, The Eternal Wedding Band on the band’s own label imprint. Long gone is the last copy of the original CD yet still new fans come a-knocking, hoping to be able to complete their collection of Pÿlon original releases. It is for them that Pÿlon and U.S. .label Roxx Records now re-release this first installment of their early doom trilogy.

As a special added bonus to the new layout of this digipack edition, the band’s 2006 line-up briefly reformed to cut two tracks, the multi-faceted rocker “Of Sorrow & Doom” as well as the punky “Who Are They?”, both written but at the time not recorded for The Eternal Wedding Band.

A work-in-progress rehearsal run-through of the album’s secret hit, “Falling Into The Sun”, showing an earlier stage of the song’s development, as well as two live recordings from one of the band’s handful of live appearances in its 14-year history round off this collection aimed both at the new listener as well as at experienced Pÿlon amateurs.

Almost entirely pre-flute-and-keyboards epics, The Eternal Wedding Band is the rocking older brother of Doom and Armoury Of God, and spreads before the listener 13 aspects of death in an original variety of inspired lyrics and musical concepts. This will be a one-time limited edition pressing of only 200 pieces in honor of the 10th anniversary of this landmark release which will be a split release between Roxx Records and Quam Libet Records, with 50% remaining in the United States and 50% being distributed in Europe.