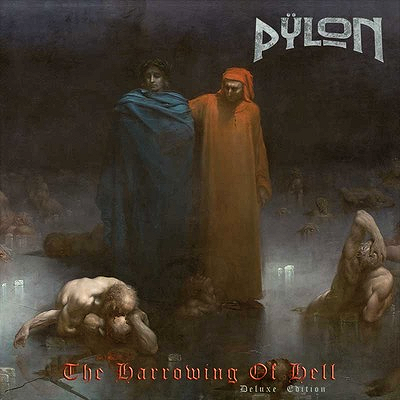 Pylon – The Harrowing of Hell (CD)

Pÿlon, hailing from Switzerland, have been garnering quite a bit of attention in the world of doom. The band has already successfully released 2 EP’s and 4 full length albums independently. Their previous 3 albums combined to form a three part opus. The first part of the trilogy entitled The Eternal Wedding Band has been out of print for years, and as a commitment to their fans that purchased it, they have vowed never to repress it again. The second and third part of the trilogy, Doom and Armoury of God, are equally becoming harder and harder to find for doom fans worldwide.

Now upon us is the band’s 5th full length release, and this new album may be the one that moves them to the head of the pack. In late 2012 this album was released as a Limited Edition vinyl version of only 300 copies and contained 7 tracks for those avid vinyl collectors. Now for the first time in a strictly Limited Edition pressing of 500 copies you can purchase an expanded CD version of “The Harrowing of Hell”!

As an added bonus for those that act fast and if you have been searching for the Trilogy this may be the only chance you have at getting some of those tracks on CD again, and only here as a part of their brand new release. We are offering a special 2 disc deluxe version which is set to contain a collection of tracks from the Trilogy, including a beautifully 2013 remixed version of ‘Falling into the sun’ exclusively here!