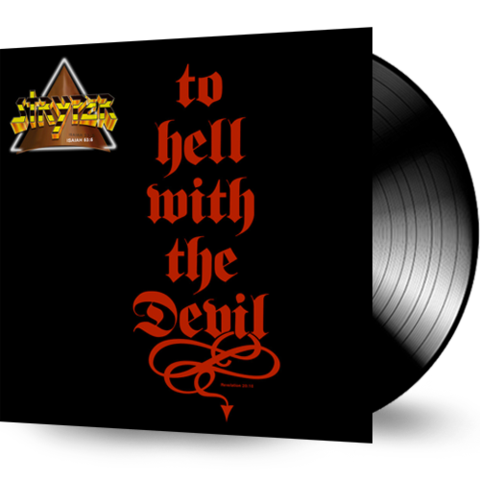 Original 1986 Enigma/Benson Pressing. To Hell with the Devil s Stryper’s third album, released on October 24, 1986 on Enigma Records
Calling on You”, “Free” and “Honestly” were popular mainstream hits playing on radio stations, as well as MTV, in regular rotation giving the band much needed broad appeal. The songs, More than a Man and The Way and the title track, To Hell With the Devil, gave their already growing fan-base fist pumping anthems to sing-along with.
When “Honestly” peaked at No. 23 on the Top 40 charts, it cemented Stryper’s place in history. To Hell With The Devil went on to receive a Grammy Award nomination as was certified RIAA platinum on January 6, 1988, selling more than 2 million copies. The album is regarded by most to be one the most influential Christian rock albums of all time.
When Enigma, the band’s record label, first release To Hell With the Devil the original artwork, cause an extreme amount of controversy. Call it timing, luck or divine intervention, the publicity Stryper received was a welcomed addition to an already chart topping album.
The original artwork Angel Artwork depicted four angels, resembling the band members throwing the devil into a fiery pit. The cover was changed for Benson Distribution, the distributor for the Christian market, who carried this alternative black cover with the Stryper logo and the red album title in the center.
This is not a reissue, a re-release or a re-print. It’s an original, authentic 1986 Benson Distributors, Enigma Records Catalog number PJAS-573237, gatefold edition from 30 years ago.
Rarely does something this rare resurface and survive 30 years later, especially an album this great. So keep it sealed and frame it or open it and enjoy the music, what you chose to do with it is your choice. Whatever you do, cherish it. For many it was life-changing, for collectors, a treasured collectible, for all of us, a defining moment and memory that will live forever.
The album is a 30 year old gatefold edition. It has sat for 30 years in original boxes, stacked in a warehouse. Nearly 30 years later they have resurfaced just in time for the 30th anniversary reunion tour.

Opening the gatefold might present a challenge. We can not guarantee the condition once opened. However, if you choose to open the album, we would like to caution you and ask the you follow these brief instructions while opening.
Carefully peel back the plastic.
With the album facing you, carefully remove the actual record from the right side. It should come in a sleeve. Remove the sleeve with the record and lay it on a flat surface.
Ever so gently, slight bend the edges of the album being careful not to crease or bend the actual cover. You should hear is slightly begin to separate. This sound is ok as it’s actually the gatefold separating.
Carefully unfold the gatefold. If the album is sticking together, repeat the process once again.
If you are unable to unstick the gatefold, leave it as is, as to not damage the album cover or try taking a hair-dryer and on a low setting, blow over the entire cover, holding the blow-dryer, 3-4 inches away from the cover.
DO NOT blow-dry the cover with the album inside of it