OUR WAR IS ONLY AGAINST HELL 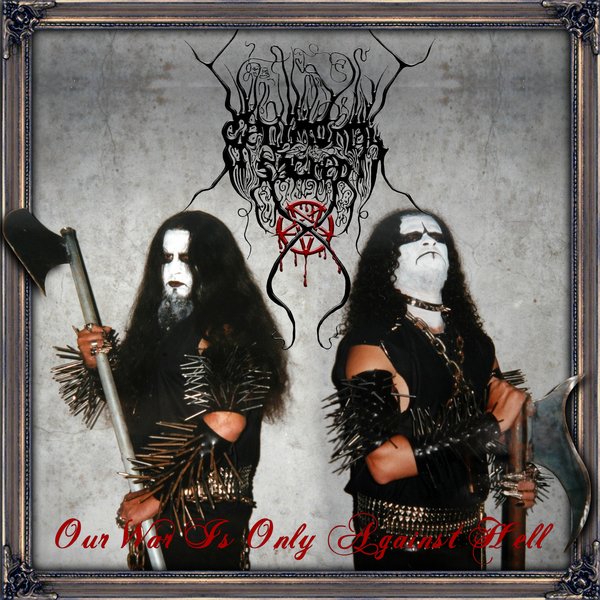 Cerimonial Sacred is definitely one of the better bands I have heard come out of the South American unblack scene. If you are interested in the South American bands, I would certainly recommend these guys along with Golgota and Devotam.

1. In My Cold Cell (Instrumental)
2. Tears Of A Christian Hero
3. Blood Storm
4. My Dead Feelings (Instrumental)
5. A Song For The Immortals
6. Religious Crematory
7. To Find The King
8. The Hell Will Not To Prevail

Tears Of A Christian Hero

The days are gone already and here lays the leached ashes which haven't had a funeral...
From happiness to pain, just like the hours
Of an endless nightmare, silently I move my body from one side to another in a constant surplus

My shaking eyes caused by the twisting of my head.
Endlessly stare at the image
Reflex from a light torch
Which sad ans silent shadow pours over me it's cold and torturing glace having the pain
And emotion in the deepest of my soul
I'm getting crazy in constant delirium in a madness phenetch
IIn my lametation verses, state delirious notes and this madness
Swallows me and it's ghostly hate cuts me, marinated
in the pain tearful well
I can fell the death bitter taste, which is peering ad wandering an the insanity pain

I find myself in a sad world, victim - like, pattern as a thousand dead bodies' extinguished image
My soul touches heaven in this deafening silence, so that they will be able to lead me where my body belongs to

The wind blows strongly out there my Lord
And announces one more winter coming, stuck in this cold cell
I am able to hear the coming storm depressed
Moaning through
The tiny opening, in the wall
Seeing the first drops of the big torment in the early morning
Still wrapped up in shrouds

I will feel the pleasant breeze in touch
with my injuried face I want to be not paying attention to anything
But watching you, before the fire reaches me

The rain has already started its gloomy whine and the terrible
Algoz cortege pulls out pieces from my starving body...
Which words will I drag up to you?
If there is no strength in my body, I'm only able to think

Sad just like the labor mornings, going now here
I wander along the empty cell, acrophobic the catatonic nostalgic
Spine in my rock hiding, the madness devils watch me
And the water noise invades my casket, it comes like a
Vengeance warning, just like it has been pushed by some powerful hands

Blood storm, such as pitilessness torrents, will dye the sky in scarlet red

Sadness runs down my face
Sadness writes me describing sorrow
Too sad that scares me
Too sad and too much, the only know how to be too sad

A Song For The Immortals

Spirits that cry
Voices mixed with the darkness on the open outside
Graves and worms that tear flesh apart
Screams outside bring me the rumors of the end of all work
Just as it will do in the sad song of a poet
Stood outside, his sad face observes me, his action
The punishment that brings me the peace with tears were shed
I don't listen to the sing of the birds ans the Angel
in a sad gesture leaned his wings
Afraid of the down, I cry, and it is raised of sentencer post in the tribunal of holy office
This is the hour that crowds will walk under the light of whose name had already been pronounced in Heaven
I make a song for the immortals longing the conquer of eternety
Purified by the inquisitor fire, I'm washed by the flames
of the decide one contemplation
In my torments I glorify myself about my actions

Sentenced to death a big bonfire was lit for me
Martirized by the pope demency, the crowed of violence start with its followers ready
The tyrant manifests it self, I'll keep my duty, I'll follow as a sheep to be degolated
in a slaughterhouse I arrive to the place of my sorrow, praying all the time

They set the fire and I hand in my soul to the one I served in hope of an eternal reward
And on the highest grave I see a tree with his open wings
And once more, if was written: Rest in Peace

Crashing the flesh
Violating every reason
A Christian prisioner of the private feast of celebration
The martyrdom is complete with sacrifice ritual
Pieces of my body are unfastened of me
The black fire traverses my veins
Oily blood that vacates my body and the pain that reveals
And over my body attacks
Morbid reality in front of me, worst the condition, burning fetidness sulfuric pirofobia insane on the religious crematory
Beast ritual invoking destroyer fire
My soul is ready to dominion that the Lord inhabits
For the celebration and delight in supremacy of His appearance
Christ was invocated to join with
His loyal in adoration
From the ashes rested, I go away...

To Find The King

Traversing all paths ...
Going all the speed ...
Beyond all we know ...
To make apparent, names that were
People who died,
And voices that have not heard more ...
To be applauded
And that their faces are remembered
in memory of many
Members of the history of martyrdom
The Christian supremacy

The Hell Will Not To Prevail

It was the collapse of the black ...
Voraz can see the sunset ...
Scroll through the cold corridors of the palace of fear
Blaze invade the kingdom of Satan.
I see nothing in my way, follow the flames of the way until the fall
The pain gets nostalgic in my bowels
I am a soldier in the battlefield.
Almas enegrecidas inquest, all are hidden
Show their spears, raise their trophies, the army of Christ
Trampling march to hell.
Millions of auras sudden, I see the dark spilling
tears and crying.
The constellation is deleting this infernal
All are prepared for collective ritual
Open up the doors, the Legions subjuguem diabolical
Anticipate the decline of the wicked souls to the infernal holocaust.
Lucifer desperately awaiting the final implementation of
his sentence of death.
I driver ignited the sword
I am an enemy of Satan, and I hate the enemy attacks, and the fruit of
I hate the seed generated in the dark
And opposition to hell a storm progresses.
Who can stop the arms of God?
Who is that with a spark and burn forests composed?
What demon is so powerful as Christ, whose power is eternal?
The war began ...

Our War is Only Against Hell is the debut release of Cerimonial Sacred, the unblack metal band. The album was first released in 2005, through Extreme Records.