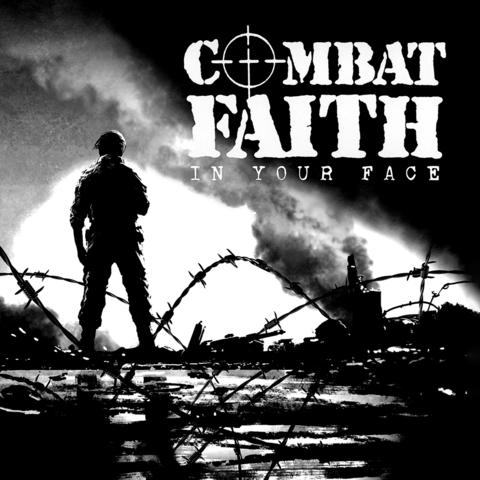 Combat Faith – In Your Face (CD)

* Limited Edition pressing of 300 only

New Mexico is a state known more for salsa music and green chili than for heavy metal. However, New Mexico had a thriving heavy metal scene in the 1980s and into the 1990s. More specifically, there were many Christian metal bands that came out of the scene including Cross (heavy metal), Rapture (heavy metal), Conviction (hard rock), Angelic Force (heavy metal), The Moshketeers (thrash), Extraction (death/thrash), Ultimatum (thrash) and Combat Faith.

Formed in 1986, Combat Faith was formed by guitarist Ric Buteau and vocalist Albert Baca with drummer Alan Tuma joining the ranks shortly after. Combat Faith formed with a passion to play heavy metal and to share their faith. The band played locally as much as they could including opening for national acts like Whitecross, Vengeance Rising, X-Sinner, The Crucified and many others. In 1989, the band recorded their first demo and continued to fill halls around New Mexico with their powerhouse sound.

The band finally began recording their first full length, 10-track album in 1989 which was never officially released. Only 4 tracks were released on cassette tape to shop to labels. Unfortunately, over the decades some of those recordings were lost, but six tracks from those sessions were retrieved for this CD. Roxx Recordshas also added the 1989 4-track demo to this CD to make a 10-track album titled In Your Face. The album is also released as a tribute to founder Ric Buteau who went home to the Lord in 2016.